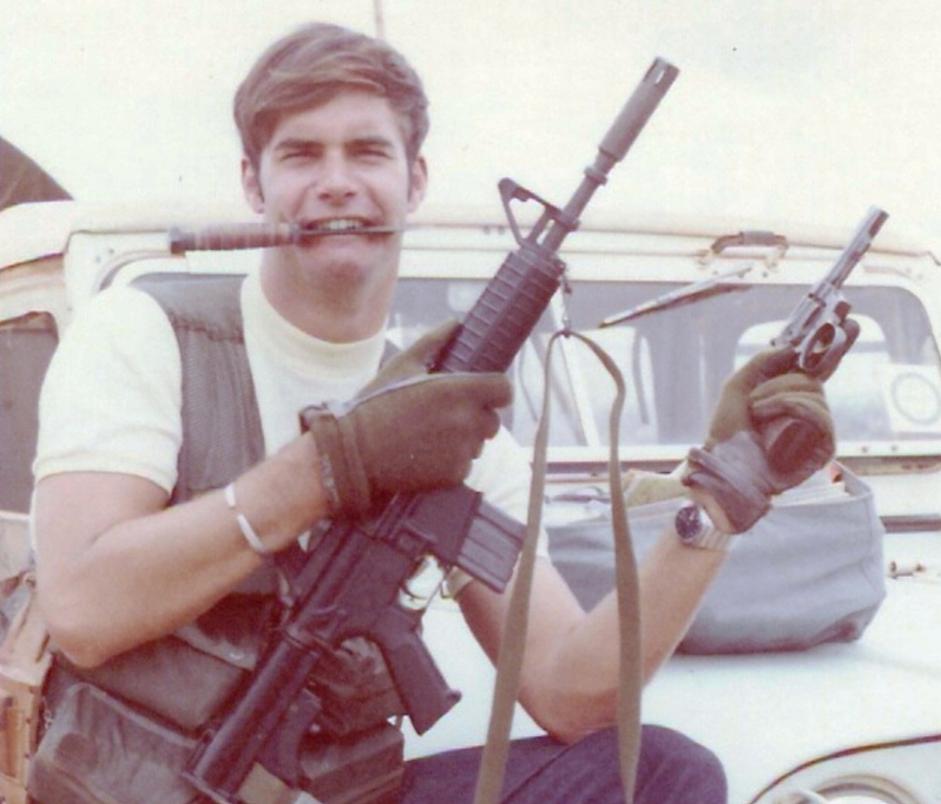 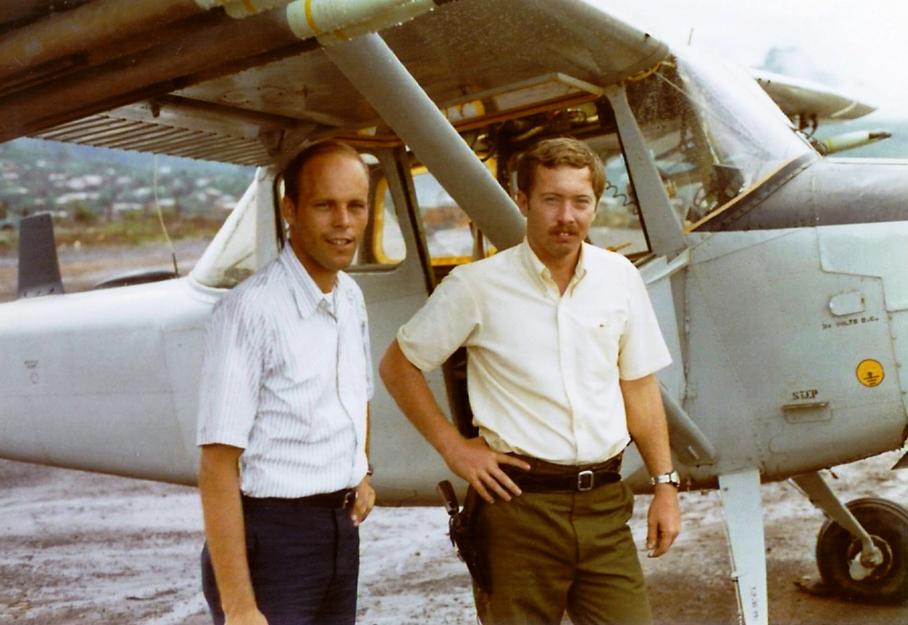 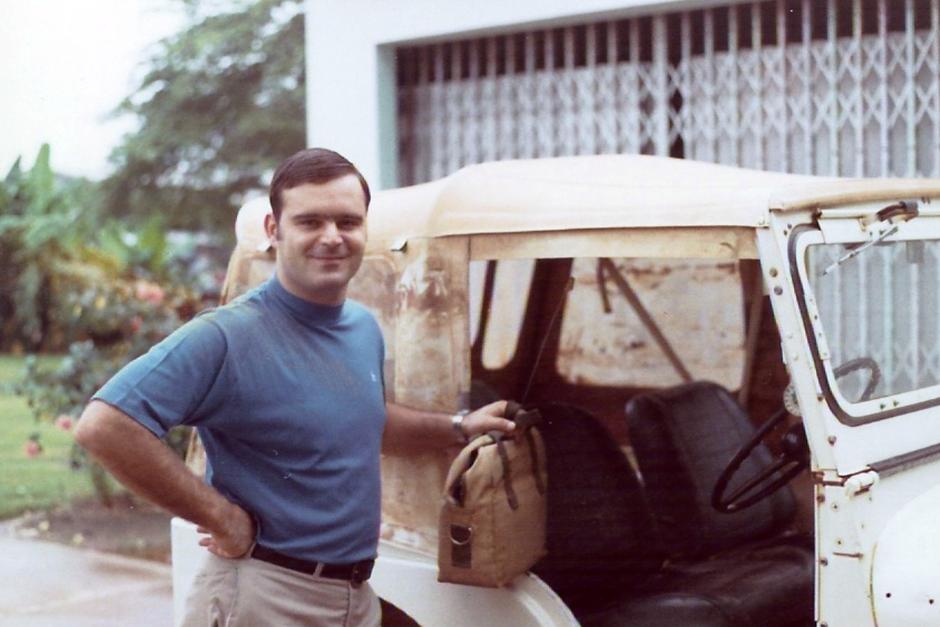 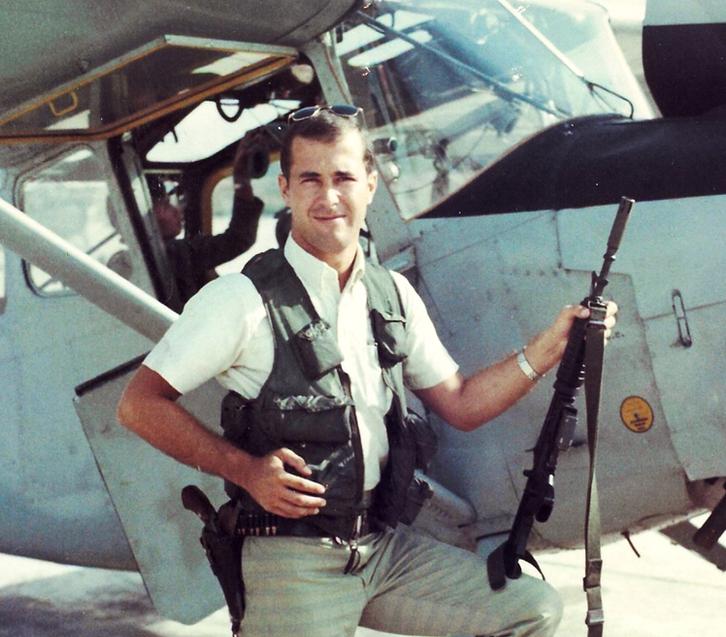 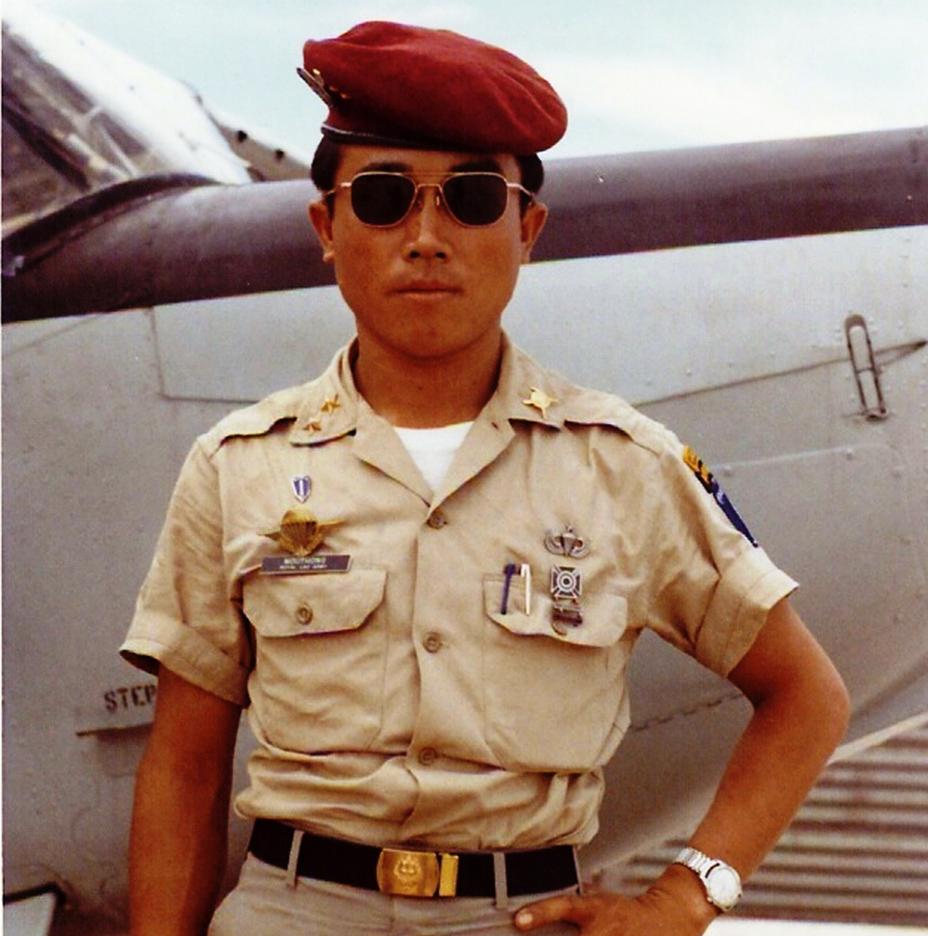 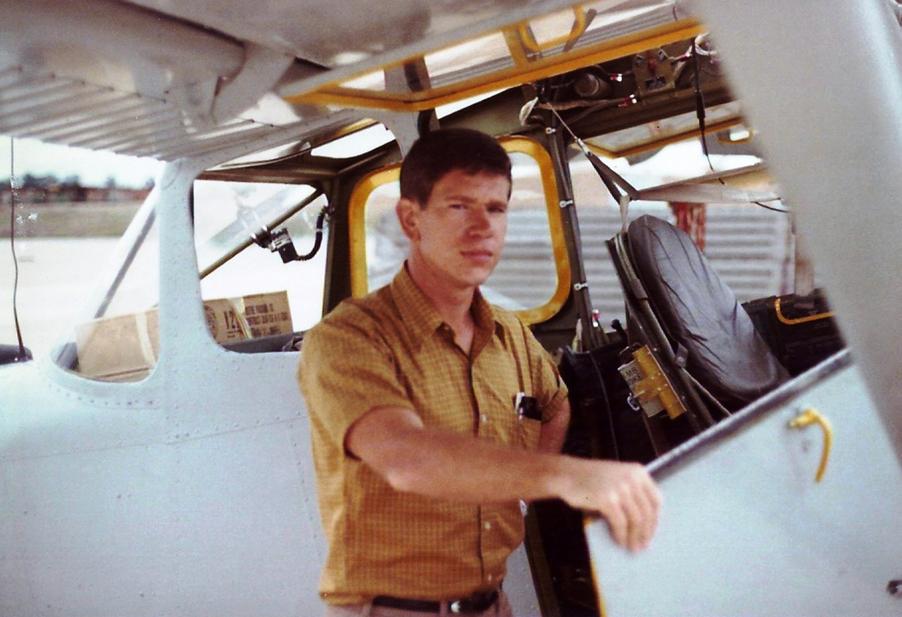 Raven 48 (Brian Wages) and Robin 6 (Francis Vang) had started out the afternoon by launching from their home base, the secret CIA headquarters at Long Tien (known also as Lima Site 20 Alternate since remote landing strips scattered around Laos were called Lima Sites), heading for a Lima Site and Hmong fortified village northeast of the PDJ (the Plaine Des Jarres in central northern Laos) controlled by the uncle of the famed Hmong general Vang Pao.  En route they intercepted a distress call from the crew of a Bullwhip RF-4C reconnaissance aircraft which had been damaged by ground fire and was about to go down.  They immediately diverted to the bailout area which was east of the PDJ and south of Route 7, the main conduit for North Vietnamese infiltration into Laos.  By the time two Sandy A-1E search-and-rescue (SAR) control aircraft showed up about thirty minutes later to manage the SAR, Raven 48 and Robin 6 had pinpointed the location of the crewmembers on the ground.  They then worked with the Sandy’s and – lightly armed with only white phosphorous smoke rockets used to mark targets for bomb-carrying aircraft and the 50mm guns in their T-28’s wings -- made multiple fake attack passes on likely antiaircraft artillery (AAA) hiding sites near the downed crew’s location, a practice known as “trolling for guns.”  The sites that actually held AAA invariably opened fire on the “attackers,” revealing their positions at which time the better armed Sandy's would roll in and attempt to destroy them.   The overall objective was to sanitize the area so CH-53 Super Jolly Green Giant rescue helicopters could come in and extract the downed crewmembers with reduced risk.

The Raven/Robin team eventually ran low on gas and were just about to head back to Lima Site 20 Alternate when Sandy 1 was shot down, and Sandy 2 got shot up and exited the area.  Recognizing the threat to the downed crewmembers from enemy forces in the area, the Raven/Robin duo remained on scene for another 30 minutes waiting for a replacement SAR control team to arrive and escort the rescue forces in.  When they finally showed, Raven 48 marked the locations of the three downed crewmembers with his remaining smoke rockets, and he and Robin 6 exited the area to return to base.

Night fell before they made it back to 20A which had an unlighted runway, no published instrument approach, and was surrounded on three sides by karst ridges.  With landing infeasible, they turned south for the Laotian capital city of Vientiane which had a lighted runway some 50 miles away, worried that they might not even have enough gas left to clear the mountain ridges lying between 20A and Vientiane, let alone reach Vientiane.

The Raven/Robin duo set up a maximum range cruise at 8,000 feet and was heading south when night fell.  Their T-28 had taken some damage from ground fire during the rescue operation, and the cockpit lighting was totally inoperative, so Raven 48 had to hold a penlight in his mouth to monitor the instruments while maintaining their altitude and heading.  Raven 48 told Robin 6 that if, as expected, they ran out of gas, they would glide down to 6,000 feet (which would have given them a 2,000-foot pad over the highest ridgelines), at which time Raven 48 would open the canopy and command a manual bailout over the wing since their aircraft was not equipped with an extraction or ejection system.  Robin 6 was to go first while Raven 48 maintained aircraft control.

Eventually, the engine sputtered several times and finally quit entirely.  Raven 48 established a 120-knot glide speed, and they descended to the pre-established bailout altitude.  On reaching 6,000 feet, Raven 48 opened the canopy and commanded a bailout but Robin 6 either could not hear the command (possibly due to inter-cockpit communication problems related to the overall electrical problems they were experiencing) or Raven 48 had not been sufficiently clear in his instructions.  In any event, after gliding down another couple of thousand feet, and with absolutely no idea how high above the ground they were, Raven 48 decided that the only thing to do was to climb out on the wing, slide back until he was in a position to pull himself into the rear cockpit, and then climb into the back seat, manually disconnect Robin 6 from the seat, and pull him out so they could jump together.  The first part of the plan was surprisingly successful with Raven 48 unstrapping himself, climbing out on the wing, and sliding back down the wing to where he was face-to-face with Robin 6 in the rear cockpit.  Amazingly, the aircraft sustained a wings-level gliding descent during the minute or two the maneuver required.  Unfortunately, however, as he repositioned his hands to pull himself into the rear cockpit, Raven 48 was peeled off the wing by the wind, bounced off the aircraft’s tail, and went tumbling into the dark.

Recovering, Raven 48 stabilized his fall, pulled the parachute ripcord, and floated down into the jungle canopy below.  He crashed through several layers of foliage until his parachute momentarily snagged on some branches and he was able to wrap himself securely in dangling vines which held him up the next time his parachute broke free.

Raven 48 remained clinging to vines in the jungle canopy for another hour or so until one of the Super Jolly Green Giants returning from the SAR area after picking up the Sandy pilot arrived overhead on its recovery back to its home field at Udorn Royal Thai Air Force Base (RTAFB) across the Mekong River in Thailand.  The rescue helicopter lowered a jungle penetrator to Raven 48 but was unable to winch him out of his position in the trees due to the jungle canopy.  Fortunately, however, the rescue helicopter had a floodlight to illuminate the scene which showed Raven 48 that he was only about 50 feet above the ground.  With the floodlight providing illumination, he climbed down vines to the ground and hiked about 300 feet south to a clearing where he climbed aboard the rescue device and was hoisted into the helicopter’s cabin.  After spending the night at Udorn RTAFB, Raven 48 returned to Long Tien from which he flew missions for another two weeks before he was reassigned to the Raven operation at Savannakhet in Southern Laos from which he flew missions over parts of the infamous Ho Chi Minh Trail in eastern Laos along which the North Vietnamese resupplied their forces in South Vietnam.  In September 1970, after more than two years and almost 700 combat missions over Laos and North Vietnam as an F-4 pilot and 0-1/T-28 Forward Air Controller, Brian returned to the United States and entered language school in preparation for graduate study abroad at the Hebrew University of Jerusalem, Israel.

Meanwhile, having been ‘abandoned’ by his pilot, Robin 6 determined that he, too, needed to leave the aircraft and executed his own bailout.  Landing on the ground, he spent the night on the jungle floor where he was discovered the following day by friendly villagers and taken to Vientiane for medical treatment.  He recuperated in a hospital there for some time before returning to Lima Site 20 Alternate and resuming the fight.  When Laos fell, Francis was among the Hmong who made it out of Southeast and resettled with his family in St. Paul, MN. 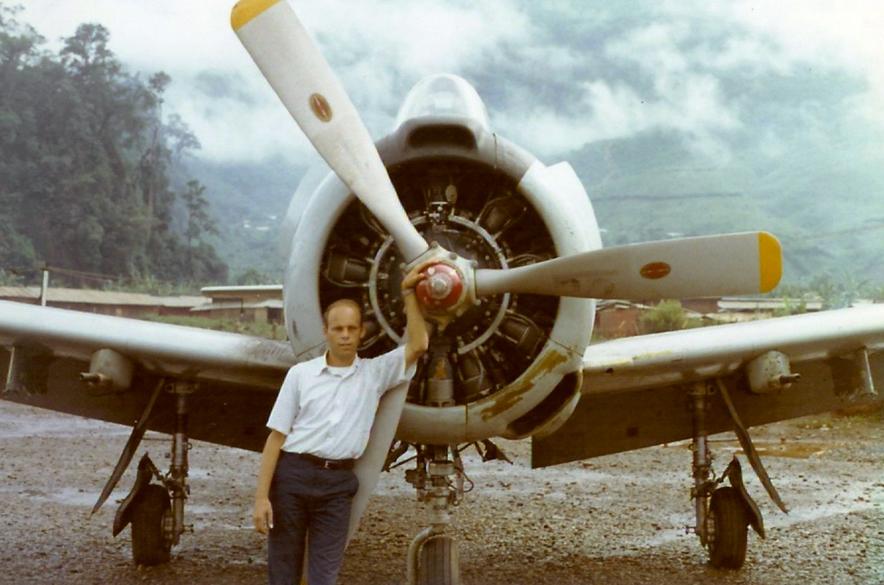