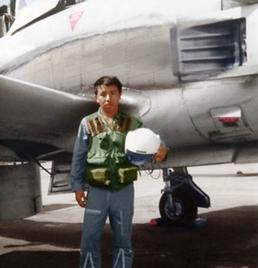 My name is Tou Vang and I am a former T-28 pilot who graduated with Yia Kha. Both of us began our training during the same recruiting class and we graduated at the same time too. Yia liked to travel and was willing to share his story. As for myself, I have always believed in being humble and so have never really shared my own personal story.  It is just now as I am older, I realized that it is something I should do so that my children and future generations will have a reminder of my story.

I, Tou Vang, was born in January 1951 in Ban Phou Luang, Laos. My parents had a total of 13 children, 8 sons, and 5 daughters.  As of today, there are only four surviving brothers now living in North Carolina.  My parents were typical Hmong farmers and grew up in the country, so I didn’t dream that I would have a chance to go to school and become a pilot.  However, through my parent's hard work in the fields and support, I was fortunate to not only be able to attend school but even to complete four years of college at Dong Dok College in Vientiane, Laos in 1969.

After graduating from college, I went on to serve in the finance office at military region II from 1970—71. During this period in time, the Vietnam war was raging in Laos, and so I decided to help serve in the battle and went on to attend the English language course at Udorn Thani, Thailand in preparation for flight school. From January 1971 to June of 1972, I attended ground school in Bangkok, Thailand and began my flight training. I began learning to fly a single-engine propeller plane known as the T-6 at Hua Hin, Thailand.  Also during the period from June 1972 to April 1973, I continued on to advance English language school at Phone Kheing, Vientiane, Laos to perfect my English skill in order to be effective in communication as a T-28 pilot.

During April of 1973, I then entered rigorous flight training and progressed to flying the infamous Trojan T-28.  It was in November of 1973 that I completed the training and graduated from the flight program known as Operation Waterpump.  I then was enlisted to serve as a Hmong T-28 pilot where I flew multiple sorties for reconnaissance and disruption tactics in Military Region II, which was headquartered in Long Tieng until May of 1975.

In 1973 Laos had fallen to the communist regime and the U.S. had begun it’s retreat out of the area.  I had to choose to stay and face uncertain death for myself and my family if I was captured, or leave and seek asylum in the United States.  I met with my family and we came to a difficult decision that my parents and older brothers would stay behind with my elderly parents.   We also decided that I would bring along each of the oldest sons from each of my brothers in case they did not survive the war.  This would at least ensure that their family line would continue if they ultimately did not.  I left my homeland of Laos with my wife, two young daughters, 4 nephews, and two youngest brothers.  We were evacuated by helicopter to Nam Phong Thailand as refugees and lived in the processing camp known as Ban Vinai until May 15, 1976.

It was then that my family and I  had completed all necessary requirements to enter the United States under the special Falcon Visa. We landed in the United States via San Francisco, California and continued on to Bay Minette, Alabama.  Upon arrival to the U.S., I began providing for my family by working various jobs, such as furniture manufacturing, shipbuilding, and technical fabricator.  I then soon after relocated my family to the city of Mobile, Alabama where I remained until the summer of 1984.

The economy took a downturn in 1984 and with a recession looming, I then headed north to La Crosse, Wisconsin to pursue further job training.  From May to 1984-June of 1987, I studied at Western Wisconsin Technical College and graduated with a degree as an electronic technician.    With the newly founded skills I had obtained, I then moved on to Mt. Gilead, North Carolina where I was reunited with my brothers who had arrived in the U.S. in the early 80’s and lived in other states at the time.  I worked at various companies using my mechanical and electrical knowledge.  My final job before retiring was with Troy Lumber Company in Troy, NC as an electrician and maintenance mechanic.    Where I was once a lean, mean, flying engine, I am now a repaired machine given a new lease on life.  I am now retired and still living in Mt. Gilead, NC blessed with 4 daughters and 16 grandchildren.